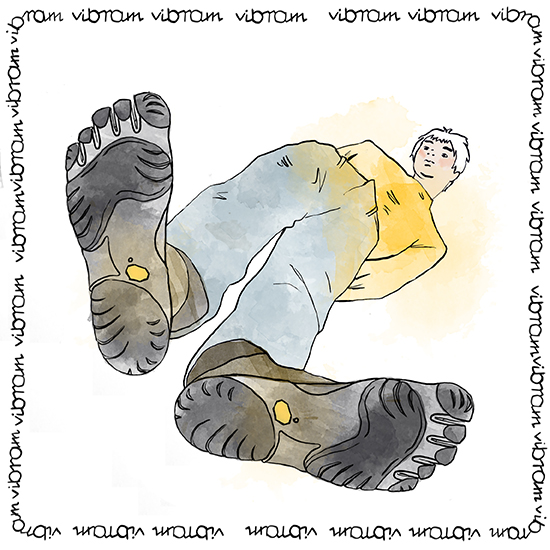 Among the 100 best inventions of 2007, Time included Vibram FiveFingers; 2008 was instead the year of the grandesignEtico International Award and the Italian Creativity Award. Vibram FiveFingers is the one always attracting international attention; a “foot glove” which, with its innovative concept and unusual aesthetics, revolutionizes the idea of ​​walking, giving the sensation of walking barefoot, but with functional protection. In total contrast to other sneakers on the market, Vibram FiveFingers represents a new step towards the future for the Milanese company, whose research and technological innovation this time focus on simplicity.

With Vibram FiveFingers the sole, also intended as an interface between man and Earth, becomes increasingly thin and with organic shapes, almost one with the foot itself, which thus recovers its maximum sensorial perception and freedom of movement. The need to get closer to the ground was already in the mind of Vitale Bramani who in 1935 wrote in the CAI journal La Rivista: “And therefore, crawling, I long for the primitive technique of Valmasino's guides, who climbed barefoot”.

In 2004, Vibram FiveFingers is presented for the first time, addressing mainly an outdoor audience, but shortly afterwards several models are designed to guarantee protection in different environments and terrains: from running to trekking, from yoga to fitness, from water sports to travel.

As Antonella Andriani wrote for ADI Lombardia Design Codex 001: Thanks to the strong identity of the company which, being sensitive to distant cultural and social currents, is a center of mediation of local and international phenomena, and thanks also to the support of scientists such as Daniel Lieberman, professor of evolutionary biology at Harvard, the innovative “non- shoes” meet the interest of the barefooting community, conquer America and the “barefoot tribe”, as described by Federico Rampini in a 2009 article for La Repubblica and then even landed at the New York marathon in November of the same year.