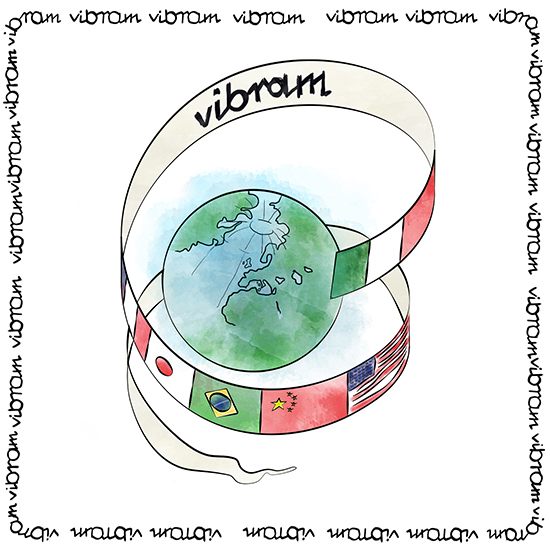 In the 1960s, driven by a continuous strive towards change, Vitale Bramani, with the help of his son Cesare, begins to expand the company around the world. In 1962, Vibram arrives in Argentina selling its concession to Gatic SA, a company led by Eduardo Bakchellian; in 1964 he lands in the United States, granting the license to Quabaug Coorporation. At the end of the 1960s, Vibram soles are produced in Australia, Chile, Greece, New Zealand, San Marino, Norway and Switzerland. Currently, Vibram owns three production sites: the historic one in Albizzate in the province of Varese, Italy, one in North Brookfield in Massachussets (USA) and one in Guangzhou, China, where the Vibram Technological Center was inaugurated in 2009. A symbol of the continuous commitment in the field of technological research and innovation, the VTC is equipped with the Performing Test Center, a futuristic scientific facility dedicated to the testing and development of new products.

In addition to the production sites, in 2008 Vibram opens its first flagship store in Milan and in 2012 the one in Boston. These places, which show the company to the world, in direct contact with sports enthusiasts and more, carry on the tradition started by Vitale Bramani with the first Vibram store, opened in via della Spiga in 1928, and which in 1932 supplies its own equipment to the Italian team at the third edition of the Winter Olympics in Lake Placid (NY). The city from which the company's history begins today hosts the Vibram Connection Lab, opened in 2019 in Milan and in 2020 in Boston: two centers of innovation and creativity, networking, partnerships and cultivating the varied Vibram community with events, experience and workshop.