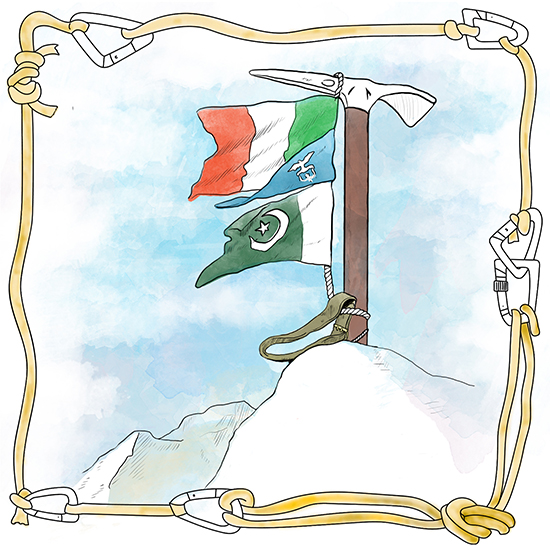 “One cannot hope to complete such a long and terrible climb, when already taking the first steps poses difficulties of this magnitude… K2 will never be climbed”. Luigi Amedeo di Savoia, an Italian admiral, explorer and mountaineer who in 1909 attempted to conquer this summit, accompanied by three hundred and fifty Indian porters, the faithful guides of Courmayeur and the photographer Vittorio Sella, was convinced of this. He was wrong. It would take another forty-five years, but the 8611 meters of K2 would eventually be conquered.

On 31 July 1954, the Italian expedition, sponsored by the CAI and led by Ardito Desio, is the first to reach the summit of the second highest peak in the world. A conquest that tastes like victory, not only for the mountaineering world but for all of Italy, a redemption for a country that is gradually emerging from the crisis left by the Second World War. “It was the greatest of the last surviving opportunities that the Earth offered to measure our strength of mind, the most daring challenge of the small man to the immensity of wild, hostile and unknown Nature”. These are the words of Dino Buzzati, which appear in the newspaper Corriere della Sera on 4 August 1954 and give the idea of the extraordinariness of this accomplishment.

The victorious climbers have the best possible equipment; they wear various types of Dolomite boots with Vibram soles: travel, trekking to base camp, approach, ascent to the first high altitude camps, final sprint to the summit. Ardito Desio writes to Vitale Bramani after returning to Italy: “The Vibram soles you provided us ... for our expedition to K2 proved to be of great use, proving themselves excellent both thanks to their durability and resistance to long approaching marches, as well as thanks to their perfect adherence to a mixed terrain of rock and ice, thus contributing to the achievement of our victory”

Vibram soles are also worn by the US expedition that in 1978 reaches the summit of K2, for the first time without oxygen. Jim Whittaker, the leader of the expedition, said that he chose Vibram because their excellent results obtained in other expeditions count them as the best soles in the world. Another of the countless victories that helped to expand Vibram's reputation internationally in the outdoor community of the 1970s.