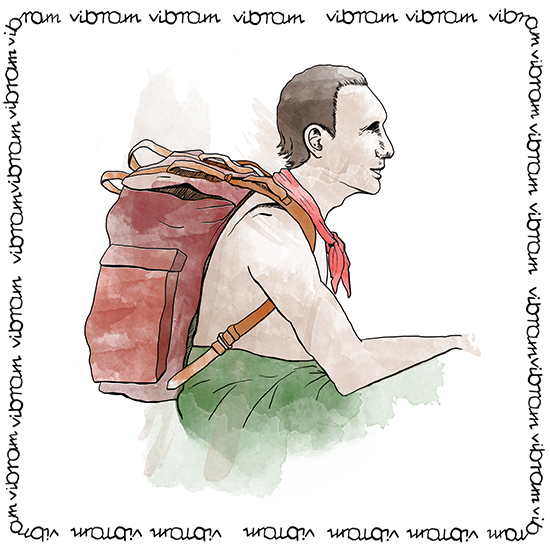 Talented mountaineer and successful industrialist; two sides of the same coin that intertwine, overlap and make Vitale Bramani a man whose life has left its mark on Italian mountaineering and international entrepreneurship. Born in Milan on 3 May 1900, Vitale shows a certain initiative, resourcefulness and an out-of-the-ordinary energy already as a child. All this energy will be channelled in his relationship with the mountains.

At the age of fifteen, he joins SEM (Società Escursionisti Milanesi, the Milanese Hiking Society), two years later he climbs his first grade 6 mountain, Torrione Magnaghi: a talent is born. From here, he attains one success after another throughout the Alps. He joins CAI (The Italian Alpine Club) at the age of twenty-five and a little later he is admitted to the CAAI, the Italian Academic Alpine Club. He is so famous that he also acts as a guide to prominent personalities such as king Albert I of Belgium, who was a mountaineer also, with whom he is portrayed in 1931 on the top of the Torre Magnaghi. In 1933, he crowns his brilliant career and receives the gold medal for mountaineering valour from the CAI. After learning the art of inlay work and cabinet making in his father's workshop in the heart of Milan, in 1928 he opens the first shop dedicated to mountaineering in via della Spiga 8, under the name Vibram, which he already used to sign his articles in the CAI and SEM magazines. Soon, also thanks to the help of his wife Maria Fasana, whom he marries in 1927, the small shop becomes a meeting point for the Milanese community of mountaineers. A story of success, which continues with the invention of the Carrarmato sole, in 1937, following the tragedy on Punta Rasica two years earlier. From this moment on, the mountaineer side of Vitale gives way to a visionary entrepreneur. In 1947, he opens Gomma Tecnica, the first factory in Gallarate; in 1957, he moves the factory headquarters to Albizzate, naming it Vibram. The vintage photos that portray him with his employees show a smiling person, clearly at ease; he is particularly appreciated because, in addition to his creative and perceptive skills, he knows how to work as part of a team.

1954 is the year of public recognition, thanks to the conquest of the K2 by Italian mountaineers, who are wearing Dolomite boots with Vibram soles. The 1960s are the years of international expansion, with the transfer of licenses for the production of soles to other countries: first in Argentina, then the USA, Chile, and then Australia, New Zealand, and the Europeans Switzerland, Greece, Holland. His enterprising spirit will always accompany him; he confirms it in an interview with journalist Walter Tobagi: "Never dwell on old ideas".