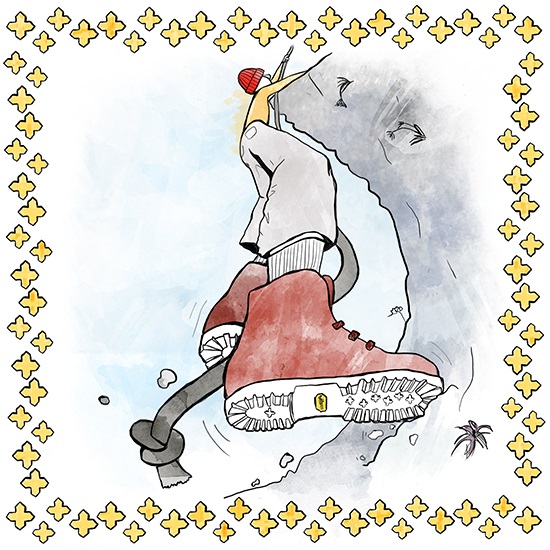 The Carrarmato sole represents the first innovative Vibram signature: a real revolution for mountaineering, allowing unprecedented performance in terms of abrasion resistance, traction and grip. It is designed, tested and patented by the mountaineer and entrepreneur Vitale Bramani, whose name the acronym Vibram derives from.

Like other great inventions, the Carrarmato sole is the result of a rebirth after a defeat. In 1935, Vitale is the leader of the SEM excursion on Punta Rasica, which turns into a tragedy: a sudden change in climate prevents the hikers from reaching the refuge, the climbing shoes on their feet freeze and do not take hold, forcing them to take shelter in a ravine in the rock; unfortunately, six of them freeze to death.

Profoundly stricken by this event, Vitale begins an incessant search to raise safety levels in the mountains; attributing part of what happened to unsuitable shoes, he seeks a solution for a sole that could encompass the grip of the mountain shoes and the strength of hobnailed mountain boots. His ingenious intuition consists in replacing the heavy iron nails of the soles of boots, used until then by mountaineers, with resistant rubber lugs. Years of tests and improvements on the first sole prototypes follow, until in 1937, Vitale Bramani, together with Ettore Castiglioni, conquers the north-west face of Pizzo Badile, using the Carrarmato sole we still use today, which has now reached an excellent level of performance.

What distinguishes the technological innovation of the first Vibram sole is the combination of rubber, used as a material, with the iconic and functional tank (a carrarmato) design; a perfect blend of Vitale Bramani’s innate duality between city and mountain; between Milan, where it all began, and mountaineering, his true passion; between entrepreneurship and natural talent.

From a stylistic point of view, the central 'cross' lugs recall Milan and the decorations on the flooring of the Galleria Vittorio Emanuele II, but also the crosses which can be found on mountains’ peaks; while the lateral 'crown' nails recall the shapes of the iron nails used until then, uniting history and innovation. All these elements, which define the design of the Carrarmato sole, are thus designed to ensure traction on all types of surfaces, non-slip grip and self-cleaning on muddy ground.